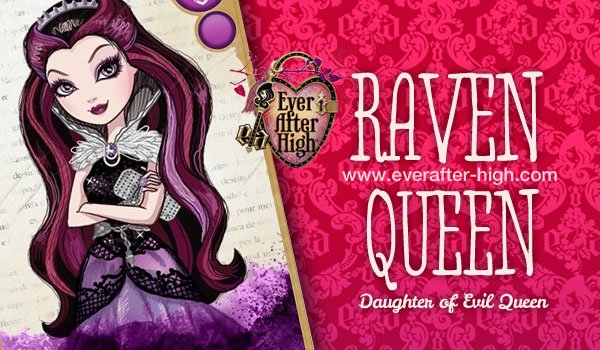 Raven Queen is one of the mainly characters of Ever After High. She is the daughter of the Evil Queen from the famous tale Snow White and the Seven Dwarfs.

Although her mother is an evil person, Raven isn’t, and she will have to overcome the dificult task to play the role of a villain nonetheless to follow her destiny. So agains all tradition, she is considering the possibility of rejecting her legacy out for her and rewrite her story.

Her secret heart’s desire: She just want to be allowed to stay true to herself. Just because she isn’t a damsel in distress doesn’t mean she don’t deserve a Happily Ever After.

Her “Magic” touch: She can cast spells, like her mom.

Storybook Romance Status: She have to figure out where her story is heading first.

“Oh Course!” Moment: She can only cast “black magic”, any time she use her powers for good, unfortunately, the spell backfires!

Fabourite Subject: Muse-ic class. She thins not only princesses get to sing power ballads.

Least Favorite Subject: Magicology. She has got a knack for casting magic, but…it doesn’t mean she like it.