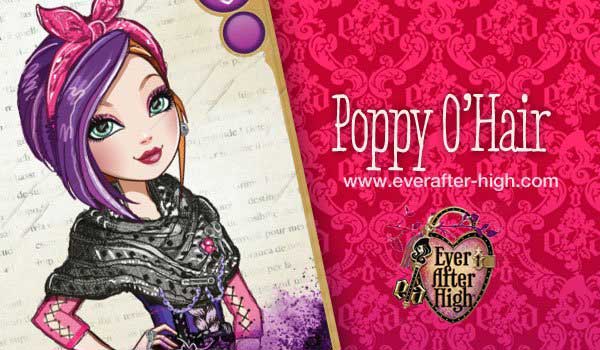 She is Poppy O’Hair, daughter of Rapunzel and twin sister of Holly O’Hair.

She has been called Roybel because her destiny is unknown since it is holly who will be the next Rapunzel, as it was thought that she was born first. Although she likes both sides she feels more comfortable with the Rebels. However they are in different sides, these twin sisters love so much each other.

Poppy has a job at the Tower Salon in the Village of Book End. She loves taking care of hair and she enjoy taking “short cuts” and she is admired for all the people in town where she has a reputation as the best stylist.

As seen in O’Hair Split Ends, it is revealed that Poppy should be the next Rapunzel because she is truly the older twin, but since no one knows, the twins prefer to continue with their choices.

About her romance, Sparrow Hood has caught Poppy’s eye, but she thinks he is quite arrogant.

Secret heart’s desire: She wants to find out her Once Upon a Time at Ever After High. That being said, she’ll never stop styling hair.

Her “Magic” touch: She thinks that being a daughter of Rapunzel, her hair is extremely valuable. In fact, she trims it every morning and put it into her savings account!

Storybook Romance Status: Belive it or not, she thinks that Sparrow Hood is cute and that he’d be a lot cuter if he’d stop singing bout how great he thinks he is.

“Oh courses!” Moment: Her sister says she is always looking for short cuts. And she says that she just doesn’t see the point of going the long way around the tower.

Least Favourite Subject: Princessology. Just because she’s the daughter of fairytale royalty doesn’t mean she wnts to be all prim and proper.