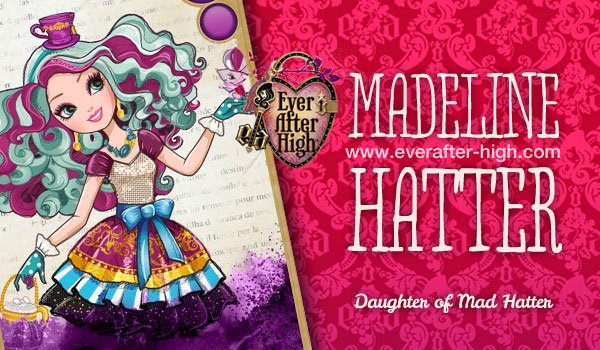 Madeline Hatter is one of the main characters of Ever After High. She is the daughter of the Mad Hatter, a crazy character from Alice’s Adventures in Wonderland, thing that is also reflected on her personality. Madeline likes her destiny and is looking forward for it. She works at the Mad Hatter’s Tea Shoppe as she is mad about tea! You will find her shop in the Village of Book End.

She is bright, very friendly and energetic. She has her tea hidden under the tea cup hat in order to be ready for the tea time wherever she goes. She is capable to hear the narrators voices claiming the future, so people sometimes does not take her seriously.

Her Secret Heart’s Desire: She wants to explore this mad world, and also own the most famous Hat & Tea Shoppe in the land!

Her “Magic” Touch: She can pull anything out of her Hat of Many Things. Tea sets, school books, white rabbits….tehy’re all in there somewhere.

Her Storybook Romance Status: She is waiting to have a tea with a boy who loves madness as much as she.

Her “Oh Courses!” Moment: She says everyone thinks she is mad. So nobody believes her when she tells to people that she can see the future.

Her Favourite Subject: Che-myth-stry. She loves making potions that make her grow or shrink!

Least Favourite Subject: Debate. She says that if more people spoke in riddles, maybe she would do better in this class.

Her Best Friends Forever After: Raven queen and Cedar Wood. Although the truth is that she likes everybody!