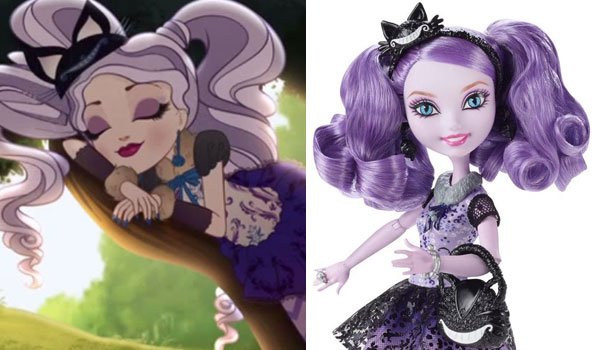 This doll is the first wave of Kitty Cheshire, the daughter of the Cheshire Cat. Is like the Kitty Cheshire in the show but with little differences, let’s see them!

She has brown eyebrows and pink eyeshadow all around her blue cat eyes. She has pink lipstick on her lips and she show a beautiful smile. In fact, she is the first EAH character that actually show her teeth in her smile.

Her hat is black with the cat white smile and cute ears and it’s attached to the headband. Then we have her signature hairstyle with her two curly pony tales at each side of her head.

Her black earrings look like little yarn balls. And her purse is like a cat face which is so cool.

Looking at her outfit you can see her little sleeves in a black mesh and then around her collar she has this fur collar made of plastic with a purple bow at the end. The top of her dress is light purple with little smiley faces pattern. The skirt has a pretty black pattern mesh and its bottom is purple.

Going down to her stockings, you can see they are light and dark purple with a zig zag pattern on them.

As I told before, this doll has major differences between the show version of Kitty and the this doll version:

The big first one is the skin tone which is very purple in the doll while in the series is a normal skin tone.

There are also some differences in the shoes which in the doll are black but white in the show. Overall they have made the kitty basic doll a lot of more purple.

This doll comes with silver doll stand and key comb, as well has her little story bookmark which is a really cool story which mentions how the people from wonderland got to everafterhigh and why they’re stuck there. And it also mentions two other upcoming wonderland characters in ever after high series that are comming out this year: the bunny and alllistar wonderland, who is going to be the frist boy doll in the wonderland series of EAH!

You can see here, Kitty Cheshire in her box.