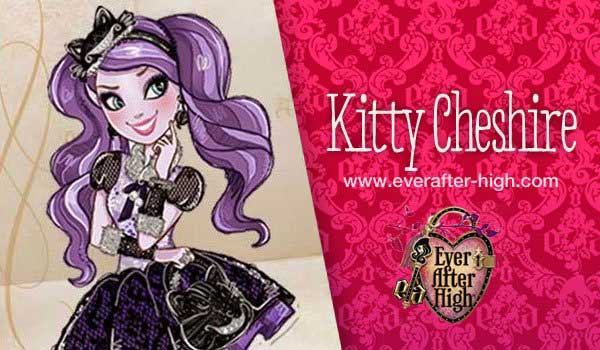 Kitty Cheshire is the Daughter of Cheshire cat and her parent’s story is from Alice’s Adventures in Wonderland.

About her personality, Kitty has a penchant for mischief, like her mother. You will see her most of the time smilling, even if she’s annoyed. She also has a thing that Maddelin Hatter has too, she has the ability to hear the Narrators, however, she usually ignore them.

Did you know that she is a genius knitting? She loves yarn as much as pulling pranks. But she isn’t always mad, she is very loyal with her friends.

Kitty has a beautiful purple hair, pulled into curly twintails. She wars an hairband with a little hat in a cat shape. Here eyes are blue and have cat-like pupils, as well as fair skin. Her basic outfit is black and lavander with chevron tights.

Kitty’s best friend is Lizzie Hearts. She considers her as close as a sister. She also gets along with Madeline Hatter who’s her roomate as well as bunny Blanc and Alistar Wonderland.

Her Secret Heart’s Desire:  To unravel rules, just like she would a ball of yarn.

Her “Magic” Touch: She says that, obviously, she can turn invisible and POOF from a place to place without being seen.

Her Storybook Romance Status:  She forgets boys with puppy dog eyes. She wants a guy who’s the cat’s meow.

Her “Oh curse!” Moment: Her curiosity gets her in a lot of trouble.

Her Favourite Subject: Geofairy. She says that after she memorizes the lay of the land, she can appear anywhere she wants.

Her Least Favourite Subject: Swim Class in Grimmnastics. She says taht just thinking about getting soaked makes her fur stand on end.

Her Best Friends Forever After:  Lizzie Hearts. She feels she is her sister form another litter.