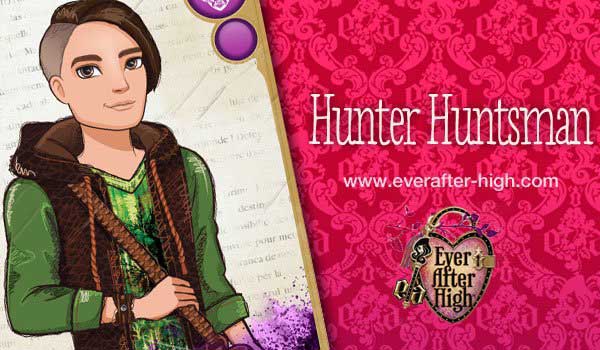 Hunter Huntsman is the son of the Huntsman, a common character in fairy tales, and he belongs from Little Red Riding Hood and Snow White and the Seven Dwarves.

Looking at his personality, we have to say that he is a little boastful, easily annoyed and distracted. He is supposed to be a hunter, and he does not like a lot this type of job, but he is very serious about his role as a hero. He loves nature and animals so he cares it deeply, and what is more, he is a vegeterian.

Hunter has Daring and Dexter Charming as friends, but he only considers himself to have a true connection with Aslynn Ella. He is his boyfriend, although, since she is a princess, wants to keep their relationship as a secret.

His Secret Heart’s Desire: He defends to be on the side of the truth and justice for all! Also, he kinds of like making sick animals feel better.

His “Magic” Touch: he can makes anything out of random stuff he finds. If you want a shoe closet give him tree branches, some honeycom and about 10 seconds. Boo-ya!

His Storybook Romance Status: Ashlynn Ella is his everthing – his Once Upon a Time, his Happily Ever After. He says, one day, he will figure out how to make their fairytale a reality.

His “Oh Courses!” Moment: His traps always break! He wonders how he can be the next huntsman if he can not hunt?

His Favourite Subject: Beast Training & Care. He thinks that nothing can be better than working with animals.

His Best Friends Forever After: Daring and Dexter Charming are his buddies, but he can really be himself around Ashlynn Ella.