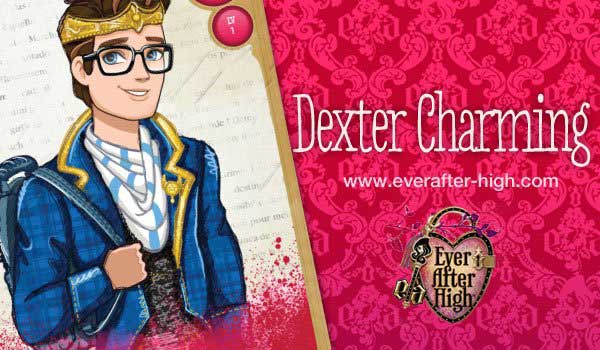 It’s been a long time since the last Ever After High card was post, but now we have a new one! A new ever after high student is officially presented.

He is Dexter Charming and is the son of the King Charming. His big brother is called Daring Charming. Dexter is shy but friendly. Although charm seems to be a family tradition, he always trips over his words when he tries to charm girls because he is quite shy. Unlike his brother he isn’t very charismatic.

Dexter has fallen in love with Raven Queen but he has troubles expressing his love to Raven so she is unaware of it. Who has a crush on Dexter is C.A. Cupid, however, Dexter seems to be unaware or not interested.

He has blue eyes and wears glasses and her hair is brown and wears a gold crown. His basic outfit is a blue plaid blazer with gold endings and a blue and white scarf. Under it, he wears a black sweater and grey jeans.

Dexter’s pet is a jackalope, which is a rabbit with antlers.

Parent’s Story: Every fairytale where a Prince Charming comes to the rescue.

His Secret Heart’s Desire: He doesn’t wants to be just anyone’s Prince Charming. She should be her true love. That’s his idea of Happily Ever After.

His “Magic” Touch: For some reason girls swoon when he takes off her glasses.

His Storybook Romance Status: He’s trying to summom the courage to aks out Raven Queen.

His “Oh Courses!” Moment: He has a hard time seeing without her glasses. He’s been told they block his “enchanting eyes”, whatever that means.

His Favourite Subject: Hero Training. He may not be the king of the class, but he loves a good challenge.

His Least Favourite Subject: Advanced Wooing. Unlike his brother, he always trip over his words when he tries to charm girls.

His Best Friends Forever After: Her brother Daring Charming and his roommate Hunter Huntsman.