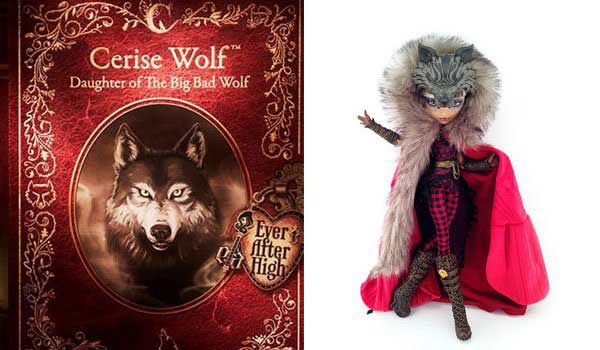 Starting for the hood which has huge wolf face on the top and the furry ribbon around the cape like if it was real wolf fur. The rest of the cape is so much longer with a beautiful cherry tone velvet.

The white hair looks so cool on her and it really brings out this sort of like wolf characteristic about her, just because of the contrast and everything. The eyes are yellow now, which we have seen in a few episodes before her eyes turned from blue to yellow. Her lips have fangs to show that she is in her wolf form. Her makeup is rally awesome, with purple eye shadow and brown stripes under her eyes.

You will be surprised when you look at her ears, she has wolf shaped ear pieces!

Look at her beautiful and huge collar piece which reminds the shapes of tree branches in old gold. This collar matches with her golden chain belt. Her shirt has a black branches design that continues at the back forming a very detailed skirt piece with little trees on the edge. Then she wears black and red checkered pants. Herhand is brown to act as a glove.

She also comes with a really pretty bag. It has a gold handle with a wolf face and it has like fur texture.

Here you can see her in this amazing and huge box

Here is some extract of the box story:

According to fairytale legend, Red Riding Hood is a carefree girl, full of innocence and wonder. Yet there was something different about her daughter, Cerise. Ever the mysterious lone wolf, Cerise Hood has spent her whole life hiding a family secret… her father is the Big Bad Wolf. During one of her many journeys through the Dark Forest, Cerise wondered, “What if I didn’t have to follow in my mother’s footsteps? What if I could let the world know I’m part Badwolf? What if..!