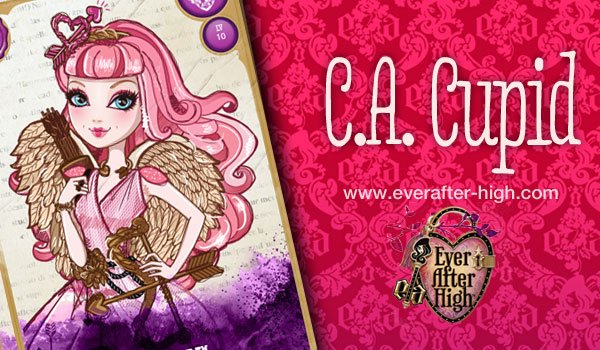 C.A. Cupid is the daughter of Eros, the god of love in Greek mythology. She moved from Monster High School to Ever After High to help the matters of love of the students. Unlike other students she doesn’t comes from a fairy tale in fact she is a myth.

She says she wants to continue to help others navigate the thrills and chills of love.

Parent’s Story: Daughter of Eros, her father doesn’t comes from a story, he is a myth.

Her Secret Heart’s Desire: She says while she does love guiding people to their “special someone”, it’s about time she inculdes herself among those deserving of love.

Her “Magic” Touch: She thinks her magic is helping people listen to their heart more than the fact that her arrow can make a person fall in love.

Her Storybook Romance Status: Dexter Charming set her heart aflutter, but she is having such a hard time letting him know her ture feelings.

Her “Oh Courses!” Moment: She is such a terrible shot with her bow and arrow. She says; “it’s not me!”.

Her Favourite Subject: Mithology because she says that you have to know wher you come from before you can know where you are going.

Least Favourite Subject: Crownculus because she thinks not everything can be solved with an equation.

Her Best Friends Forever After: Apple White, Raven Queen and everyone in between with an open heart.