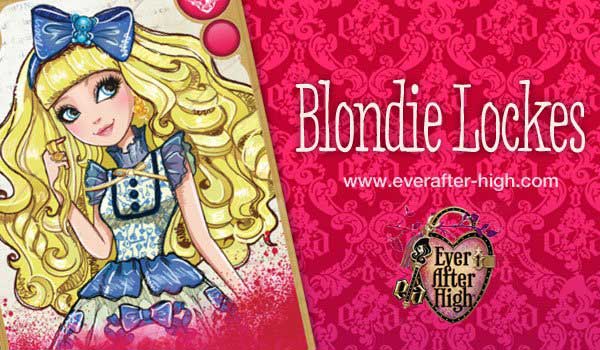 How sweet is Blondie Lockes! As sweet as the honey is, because she is the daughter of the Goldilocks, the character from the story of The Three Bears. Blondie often claims that her mother was a queen in a faraway land.

Blondie is an energetic and very social girl. She likes everything to be “just right”, so she cares a lot about small details and is very meticolous, and this, sometimes makes her hard to please.

She is mad about technology and loves programming, actually, she runs a school blog called Mirror Cast with her MirrorPad, the Ever After High equivalent of a tablet.

She has the ability to unlock any lock, and she says that she hates when people lock their dorm rooms because a lock just prevents a door from fulfilling its destiny.

Blondie gets a baby bear whom she calls Grizz.

Her Secret Heart’s Desire: Since her famili comes from an old kingdom, having her whole sotry told and being recognized for her Royal roots would be just right!

Her “Magic” Touch: She can unlock any door. It’s no big deal, really. Doors like being walked throught. She considers that you only insult their destiny by locking them!

Her Storybook Romance Status: She can’t wait to meet the Prince Charming, he is just right for her!

Her “Oh Courses!” Moment: She doesn’t understand why people get so mad when she borrow their things. She just assume if they leave their stuff out in the open, they want to share it with her.

Her Favourite Subject: Debate. For her is obviously that people need to know when they’re just wrong.

Her Least Favourite Subject:  Arts & Crafts. In her opinion, she doesn’t think her paintings should be criticized.

Her Best Friends Forever After: Apple White and briar beauty